My boyfriend recently travelled back from Spain and brought me a surprisingly large number of delicious gifts. A beautiful bottle of Ribera del Duero, my favourite water Vichi Catalan, half a kilo of Jamon Iberico de Bellota and last but not least a beautiful bottle of Palo Cortado Sherry from Rey Fernando de Castilla.

I love Sherry, have tasted most styles several times, but I drink it far too little and forget what it was all about every time. That is going to change! I declare to write more often about the different types of Sherries and to drink them more often as well.

In this article, let’s start with the most controversial and perhaps most complicated variety of Sherry, the Palo Cortado.

To understand Palo Cortado, we must first take a step back to the Fino, the Amontillado and the Oloroso, because the Palo Cortado is a related to all these three styles.

A Fino Sherry is made from a still wine that ages under a layer of flor (a thick layer of yeast). The wine is light in colour, dry and doesn’t come in too much contact with oxygen.

The Amontillado starts of as a Fino and as the layer of flor disappears in time because the alcohol percentage is increased to 18%, the wine ripens further on an oxidative basis, which causes it to change color (brown) and develop nutty aromas. The wine is fuller in style than a Fino.

An Oloroso is the most oxidative Sherry. This style never matures under a layer of flor and the wine is deeper, oilier and more intense than an Amontillado. Due to its rich aromas, the wine can come across as sweet.

Palo Cortado is born “spontaneously” (nowadays, this process can be manipulated). The wine is actually an Amontillado (it once had a flor layer) with the rich qualities of an Oloroso.

Now that we more or less understand what Palo Cortado is, the question is of course: “How do we combine this Sherry style with food?”.
I myself was not an expert on the subject and in order not to waste my precious wine (a good bottle of Palo Cortado costs around forty euros) I asked for help from my all-knowing Instagram wine community.

The advice I received was as follows:

Palo Cortado is one of the Sherries that can handle almost anything.

A fatty piece of meat.

I put it to the test! First I tasted Iberico Bellota ham with Palo Cortado. I tasted this one. A feast! An explosion of flavour and texture. The wine melts through the salty and fatty ham and leaves behind deep, nutty, umami flavours.
I also tasted olives, ripe Manchego cheese and various dried sausages with the Sherry wine. Everything matched extremely well! The wine is so full of flavour that it lifts everything. Palo Cortado is really an all-rounder and should be taken out of the wine fridge much more often!

What is your favourite combination with Palo Cortado? 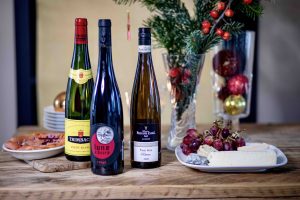 Pinot from Alsace – celebrating Christmas with the family Pinot 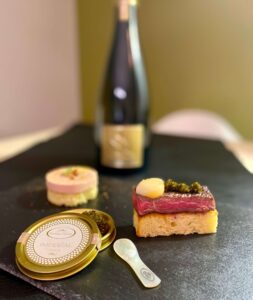 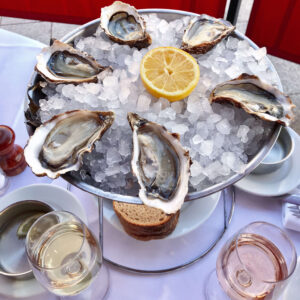 Oysters and wine – a piece of heaven on earth