Would you personally try your wine with fizzy water? Let me tell you a little secret: Hungarian people often do that. It might seem interesting that someone would add anything to the already delicious beverage.

However, it makes your wine more refreshing if you mingle it with some carbonated water or soda water as we call it. Nooo, not the kind of soda you are thinking of! Our soda is healthy and fresh, it consists of water in which we dissolve carbon-dioxide. The colder your water the bigger the bubbles in your glass. The bottle holding the soda water is called a syphon.

How is spritzer (fröccs) made?

Water is injected into the syphon under great pressure which helps the water flow through the tube and escape into your glass. What makes carbonated water in syphons better than simple sparkling mineral water is that the syphon is able to hold the carbon-dioxide inside of the bottle. This makes the water enjoyable and bubbly even for years. I have not even mentioned how environment-friendly it is to purchase dissolved water as the syphon can be refilled approximately 500 times through its lifetime.

The technical implementation of syphons happened since 1820, that is when syphons became a necessity on festivals and parties in Hungary. Mainly the youngsters consume spritzers which are one of the best thirst quenchers. You can make spritzers from white wines or rosés, but the most curious ones can also make an attempt with red wine as well. There are several types of spritzers available, all of them have their own names. The proportion of wine and water makes a difference in the taste of the beverage.

There are several types of spritzers to choose from. The most popular ones are the following: Kisfröccs or Fütty (‘short spritzer’ or whistle), with 1dl of wine and 1dl of carbonated soda water.

Nagyfröccs, (‘full spritzer’), with 2dl of wine and 1dl of carbonated soda water.

Ady-fröccs (named after one of the most well-known poets in Hungary) with 2 dl of wine and 2 dl of carbonated soda water.

Háziúr (‘landlord spritzer’), with 4dl of wine and 1dl of carbonated soda water.

Krúdy-fröccs (‘Krudy spritzer’), named after another famous late Hungarian writer), with 9dl of wine and 1dl of carbonated soda water.

As you can see, spritzer is rather easy to make and it is very enjoyable. There are only a few Hungarian people who have not tried this delicious drink but I would make it accessible for every household in the upcoming hot summer days if I could. 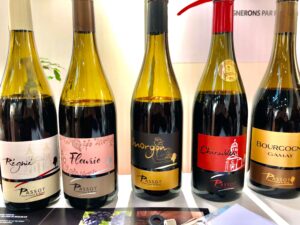